When I went through my thousands of Flickr photo postings from my time in China to look for translations I can share here, I found this Peking University leaflet signed “A PLA Officer”  from 1989 that I came across online.

Translation:
To the Officers and Soldiers:

You have been told many times that your guns will not be turned against the people. That is something we deeply believe. But have you considered that if you are sent into Beijing that the government also, just like you, will be determined not to oppress the people? Just consider the words of Li Peng several days ago — he said that the students are patriotic but also said that the students are fomenting insurrection. How can you trust someone who talks like that? To put it bluntly, the government is using you to oppress the people. You guns will forced to turn against the people. Therefore you should not go into Beijing. If not you will be remembered as criminals forever.
A PLA officer May 22, 1989
[a Peking University leaflet] 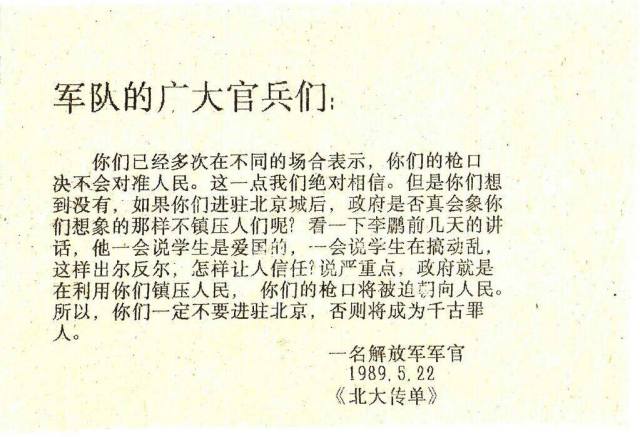 After retirement translated，with wife Jessie, Liao Yiwu's 2019 "Bullets and Opium", and have been studying things 格物致知. Worked 25 years as a US State Department Foreign Service Officer including ten years at US Embassy Beijing and US Consulate General Chengdu and four years as a China Analyst in the Bureau of Intelligence and Research. Before State I translated Japanese and Chinese scientific and technical books and articles into English freelance for six years. Before that I taught English at Tunghai University in Taiwan for three years. And before that I worked two summers on Norwegian farms, milking cows and feeding chickens.
View all posts by 高大伟 David Cowhig →
This entry was posted in History 历史, Military 军事 and tagged 64, Beijing, China, June 4th, leaflet, martial law, PLA, Tiananmen, 六四, 北京大学, 天安门, 学生, 传单. Bookmark the permalink.